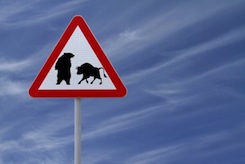 No matter which way you look, US equities are pressing into major cyclical channel resistance.  Most broad indices – the Dow Jones Industrial Average (DIA) being the exception – are making their third touch (fourth for QQQ) at the top of a rising channel entered 5 years ago in the dark days of October 2008 and last met in Summer 2011, 925 days ago.

Can stocks meaningfully correct here?  It’s a scenario (far too) widely dismissed as “Don’t Fight the Fed(-Supported Market)” capitulation takes hold.  But consider: stocks have a long way to go before their primary trend would be broken. For example, the S&P 500 (SPY) could plausibly threaten a deep correction (defined as a >-10% decline from peak to trough) by a drop to the bottom of its channel without snapping its cyclical rising trend.

The alternative – slow grind higher at trend line resistance into year-end aside – is a breakout higher from the 5-Year channel inside the smaller channel underway since the November 2012 lows and traveling at a 12-month old trajectory of almost 70 degrees.  This, too, is possible: but would likely carry the markers of a genuine blowoff top and be followed by volatile mean-reverting reprisal.

On the other hand, the market top preceding a catastrophic 2008-like period is disregarded by most as wholly improbable here – and that’s probably correct. But concentration on that trope by its friends and enemies alike diverts attention from a more plausible and perhaps imminent scenario: a market top – Fed or no Fed – that is medium-term bearish from channel resistance; and long-term bullish from channel support.

Author holds net short exposure to the Russell 2000 the time of publication.