Early February of this year, stocks got hit while the VIX had its 2nd biggest rally ever, all while bonds hardly budged. The risk off trade didn’t rotate into currencies either. The US dollar has been moving lower while yields have moved up. FX traders must be paying more attention to fiscal rather than monetary policy.

Well I think that is about to change.

I recently spied a potential for a TED spread blow up in coming weeks. What’s a TED spread and why should you care? I’m borrowing from Wikipedia for the background and my proprietary intermarket chart work for the analysis:

The TED spread is the difference between the interest rates on interbank loans and on short-term U.S. government debt (“T-bills”).  TED is an acronym formed from T-Bill and ED, the ticker symbol for the Eurodollar futures contract.

So why am I tracking a vehicle that graphically represents the difference between the three-month LIBOR and the three-month T-bill interest rates when my trading horizons are three months at best?! Because LIBOR has been spiking YUGE of late, and a rising TED spread often foretells a downturn in the U.S. stock market, as it indicates that liquidity is being withdrawn. The TED spread is an indicator of perceived credit risk in the general economy, since T-bills are considered risk-free while LIBOR reflects the credit risk of lending to commercial banks. An increase in the TED spread is a sign that lenders believe the risk of default on interbank loans (also known as counterparty risk) is increasing.

There is a fab teaser article by Lawrence McDonald on Why The LIBOR Spike Matters to Stocks and Profit Margin.

In recent years, ridiculously low rates placed interest coverage rations at a healthy 4.3x.  But wait.  What happens to that smelly $1T pile of  BB in rated floating rate loans when libor spikes?  In our view, interest coverage plunges below 3x on lower quality paper.  If Powell’s FOMC goes through with (Street’s expectations) hikes 3-4x rate hikes this year, we’re looking at a substantial surge in the default cycle.

The surge in three-month libor matters because the entire ecosystem of U.S. short-term corporate finance is being repriced.  The Street is finally waking up to credit risk tied to rising rates.

More Wiki-goodness: The long-term average of the TED spread has been 30 basis points with a maximum of 50 bps. During 2007, the subprime mortgage crisis ballooned the TED spread to a region of 150–200 bps. On September 17, 2008, the TED spread exceeded 300 bps, breaking the previous record set after the Black Monday crash of 1987. Some higher readings for the spread were due to inability to obtain accurate LIBOR rates in the absence of a liquid unsecured lending market. On October 10, 2008, the TED spread reached another new high of 457 basis points. In October 2013, due to worries regarding a potential default on US debt, the 1-month TED went negative for the first time since it started being tracked.

And now for my potentially revealing intermarket analysis that foretells great risk: 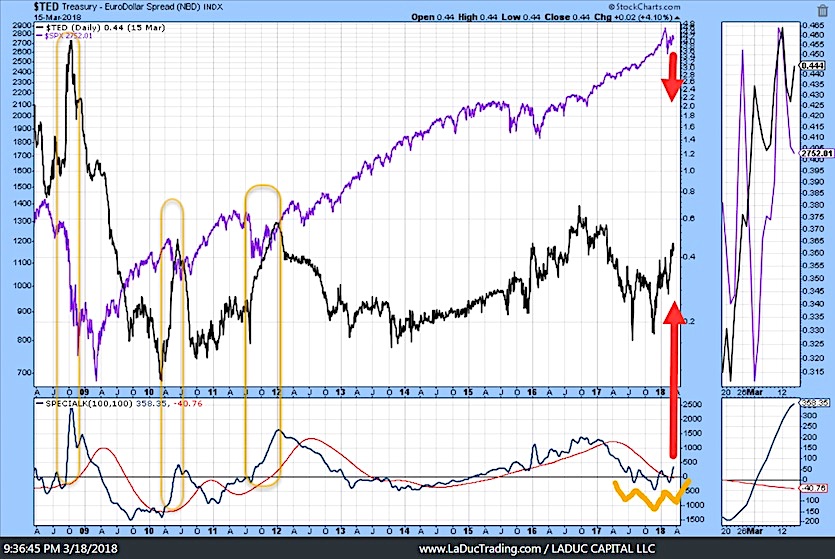 First, note the three yellow shaded areas on the left side of the chart and how these three TED spread blow ups corresponded with sharp stock sell-offs. Now scroll all the way to the right to see the inverse head & shoulder pattern forming in this indicator. Lastly, have a look at my 20-year bond chart TLT to see the similarities. 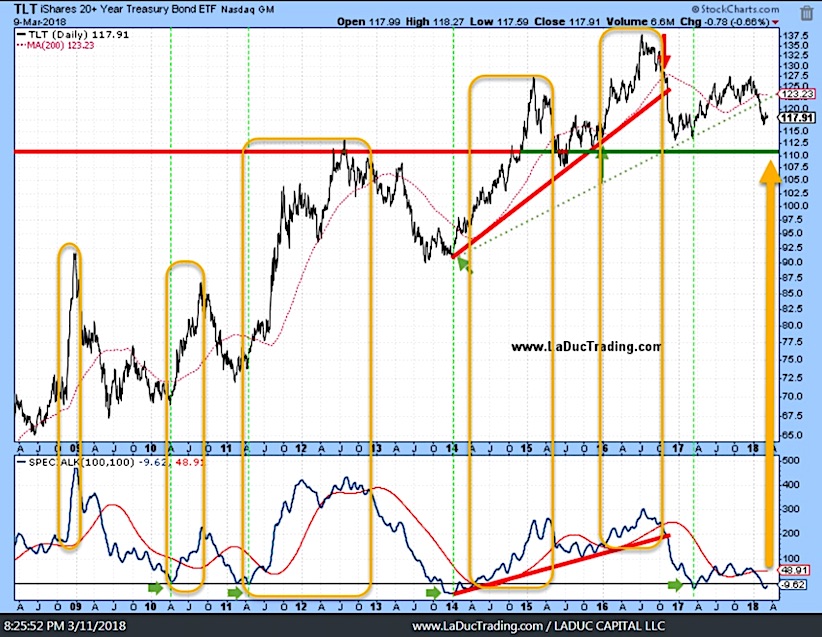 I never noticed before how similar these two instruments trade, once smoothed with a smoothing indicator and stacked on top of each other.

Now you know why I care. I think a rotation out of risky assets – think FANGMAN stocks – is coming and credit (TED spreads) will lead the next leg of the equities correction I have been predicting.

Chart: US LIBOR-OIS spread widens to the highest level since 2012 as tax-driven capital repatriation leaves a shortage of dollars outside of the US – pic.twitter.com/2dnBylxuY0

Speculators are so confident about higher rates that they are short almost $4 trillion ED futures.

Kevin Muir has a good take in his article That’s Not a Bond Bear Market:

That’s why last week in my Intermarket Chart Attack, I proposed TLT and USD would likely bounce even though Trump Tariffs are USD deflationary. My thesis: what if the Fed is slow to raise rates and they fall on this expectation? I wonder if all that hedging of higher rates starts to get unwound after the Fed announcement causing TED spreads to spike and markets to sell off. We’ll know soon enough

With that, Careful and Happy Trading!

Come join me… I made it super easy for you to trade with me: 1. Pop into my LIVE Trading Room any time you want. 2. Get real-time Portfolio tracking of my trades with SMS/Email. 3. Think big picture with my macro-to-micro investment newsletter. You can also subscribe to my Free Fishing Stories Blog/Videos and find me @SamanthaLaDuc.  Thanks for reading and Happy Trading!