The world’s markets are entering unchartered waters, forcing today’s retirees to be vigilant and discerning as never before. As a money manager, I am constantly researching data from a variety of sources so I can properly advise and position my clients, not only for how the markets are behaving today, but also for how they will perform in the future.

Based on the stage of our current economic cycle, I remain defensive and continue to rely on low volatility instruments, like US Treasury bonds and stocks that act like bonds. Even though bonds have seen some losses in the last few weeks I view that as a countertrend and expect them to recover.

In this article, I hope to give you a glimpse into some of the data I’ve been analyzing, which has caused me to be very cautious in how I manage market risk, especially with a larger client base of retirees.

Most people haven’t heard of the Bank for International Settlements (BIS). Headquartered in Basel, Switzerland, it operates outside the laws of any sovereign country. According to their website (www.bis.org) it was established on 17 May 1930 and is “the worlds’ oldest international financial organization. The BIS has 60 member central banks, representing countries around the world that together make up about 95% of world GDP.” In other words, they are the bankers of central banks.

According to a recent research report by Agora Financial, the heads of major central banks including the U.S., Japan, and European Central Bank meet there monthly and the minutes of those meetings aren’t ever made publically available.

Since the BIS has access to a wealth of important information from central banks around the world, they are uniquely positioned to do research on the global monetary system. They have access to information that can’t be found anywhere else.

The reason I am talking about this is because the General Manager of BIS, Jaime Caruana, presented a report on June 26, 2016 in which he identified 3 major risks to the global collapse. He referred to it as the Risk Trinity. “The risk trinity is the result of 3 long term trends in the global economy: rising debt, lower productivity growth and diminishing room for policy maneuvering”. He continues that those trends “give rise to three threats: macroeconomic instability; the adverse effects of persistently low interest rates; and a loss of confidence in policymaking.”

Negative interest rates are especially destructive to the financial sector. It shouldn’t be a surprise that 2 of the largest banks in Europe are failing. The probability of additional bank failures is likely. And without inflation, debt is an issue.

In last week’s commentary I explained that governments need inflation to help them deal with their debt problems. Data from the G20 shows that inflation has been deflating the last 3 years. 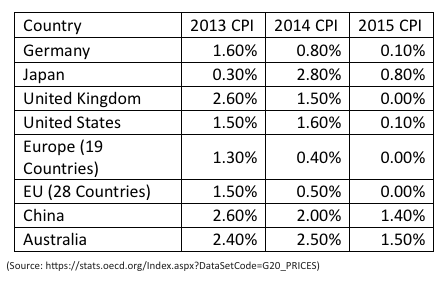 This table clearly shows the inability of Central Banks to engineer growth and/or inflation. When coupled with their continued printing of more money and/or lowering interest rates, it is becoming more abundantly clear that global systemic risk is increasing.

It’s not just the BIS that is sounding warning alarms; the International Monetary Fund did the same when they lowered (again) their annual global growth forecast.

“The world economy turned in its worst performance in six years in 2015, expanding by 3.1 percent, according to calculations by the IMF.” And they forecast even lower growth for 2016—slowest since 2012. Historically, their estimates are overly optimistic making it likely that actual growth will be even less. From Bloomberg.

“Perhaps the most striking macroeconomic fact about advanced economies today is how anemic demand remains in the face of zero interest rates,” former IMF chief economist Olivier Blanchard wrote last week in a policy brief for the Peterson Institute. – From Bloomberg.

So What Does All This Mean?  Here’s my thoughts: