The major stock market indices fell for the third week in a row last week triggered by a host of issues stretching from concerns over the viability of the U.S. consumer, falling commodity prices, China’s troubled economy and the rally in the U.S. Dollar. Coming economic data may be the wild card here.

Concerns surrounding the U.S. consumer could be overstated, however, given the surprisingly strong retail sales report for April and the surge in consumer sentiment found in Reuters/University of Michigan Consumer Index, which climbed to its highest level in nearly a year. Additional evidence that the U.S. consumer should not be written off is found in the fact that job openings are at an all-time record high (as reported by JOLTS) and wage gains are accelerating and becoming more widespread.

The economic data due this week including April housing starts, industrial production and the leading indicators (LEI) are all anticipated to be stronger than the previous month. The focus this week will also be on the Fed’s release of the FOMC minutes from the April meeting, which are expected to support the view of only a small chance of an interest rate hike in June.

The bottom line is that enough uncertainty surrounds the market to anticipate that stocks will remain in a trading range. Support is near 2000 on the S&P 500 Index, while resistance sits at 2100. 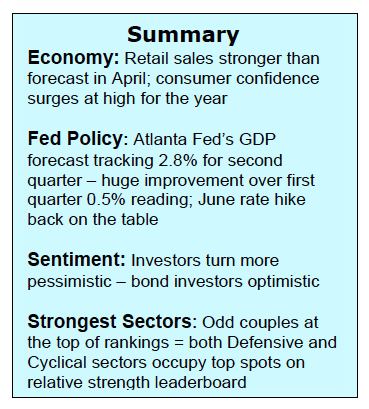 The weight of the technical indicators is mildly positive. Despite the popular averages experiencing three consecutive weeks of declining values, the combined loss has been a modest 2.0%. The resiliency of the equity markets is underscored by the fact that while there have been persistent investor outflows from mutual funds and ETFs, the market has maintained its positive intermediate-term trend.

In addition, market breadth is favorable. Unlike last year when fewer stocks were participating in rallies, the median stock within the S&P 500 Index this year is outperforming the index. Last week’s pullback pushed stocks deeper into oversold territory while raising the level of investor concerns (and negative investor sentiment). As a result, investor pessimism has moved closer to the extreme readings seen prior to the market rally in February. This is seen in the latest survey from the American Association of Individual Investors (AAII) that showed another drop in bulls last week. The AAII data now shows only 20% bulls and 31% bears.

The investor sentiment readings for stocks are 180 degrees south of what we are seeing for bonds. Inflows into bond funds are strong with bullish sentiment approaching levels last witnessed in 2012. Using contrary opinion the bearish sentiment on stocks suggests cash is building that could support a future stock market rally. Additionally, the excessive investor optimism towards bonds suggests a cautious approach. Keep an eye on U.S. economic data releases this week. 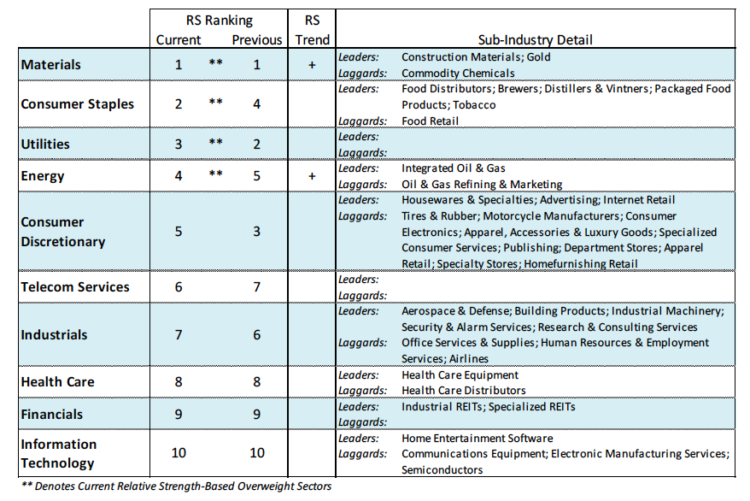