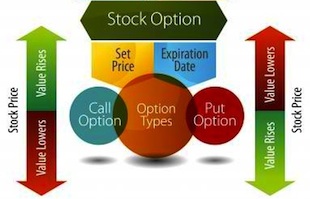 By Brad Tompkins
In the previous article discussing Options Basics, we introduced options trading fundamentals and followed a sample Call contract trade. As a quick review, a Call option contract gives us the right to buy 100 shares of the underlying security and is a nice tool to place a speculative long trade with tightly defined risk while tying up a small amount of trading capital. Now let’s explore a Put Option Contract. A Put is similar in structure to a Call, but is the right to sell 100 shares of the underlying security at a set strike price. Since a Put increases in value as the underlying drops in value it can be used as a vehicle to protect portfolio positions in case of a downturn as well as for a speculative short directional trade in a security.

Let’s take a look at using Puts to hedge and protect gains for your account. Imagine a scenario of making a purchase of Chipotle (CMG) stock back in January 2011 on a nice bull flag setup. See the weekly chart below. CMG went on to make spectacular gains over the next year and in April 2012 it overthrew the upper channel line and spiked RSI to 80 signaling a potential overbought condition. CMG did indeed correct back to the 20 week moving average and by mid June showed signs of not being able to retake the 425 level and possibly creating a swing failure. During the week of June 29th, CMG broke the support line and screamed warnings for us to get aggressive managing risk if we hadn’t done so already. 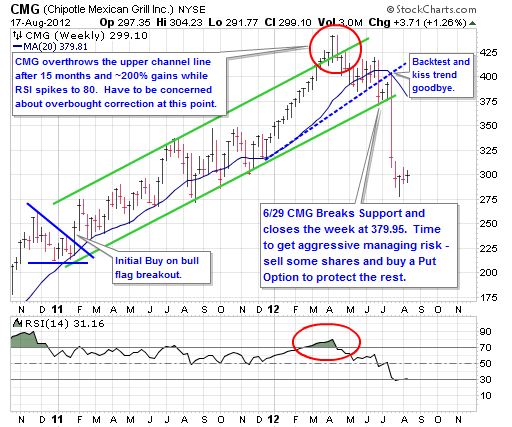 One strategy to manage CMG risk would be to sell off the position and pocket all the gains. However, given CMG corporate strength demonstrated by +20% income growth and no debt, we might want to hold onto some of the stock for the long haul appreciation. An ideal solution is to sell ½ of the shares to recover most of the original principal and use a portion of the profits to purchase a CMG Put option to lock in gains on the remainder. A protective put creates a loss protecting floor at the strike price minus the cost of the put. And when that breakeven is well above the initial cost of the shares you are in a fantastic no lose position. From a trading perspective, the most satisfying positions are when you can play with “house money.” The worst case scenario is still a very good profit and at the same time, the put allows unlimited gains if the stock continues to run higher — you’d only be out the cost of the put premium.

Protective Puts Save the Day

Fast forward from June and we now know that CMG’s July earnings report slightly disappointed and the stock had a nasty drop while unprepared traders were scrambling for the exits. Let’s examine the results comparing an in the money 400 strike put with an at the money 380 strike put. From the previous article we remember that in the money options have a higher delta which means they are more sensitive to changes in the stock price. They are more expensive, but also provide more protection. With 20/20 hindsight, the 400 strike put was the better choice given its floor level of $364 (400 strike – 36 premium) compared to the $355 (380 – 25) breakeven using the 380 strike put.

Hopefully it is apparent how the protective put locked in profits. Because no matter how far the CMG stock trades under the strike price, you would still have a right to exercise the option and sell your shares at the strike. Recall though that you aren’t obligated to exercise the put. If you felt that CMG had found price support here at the $300 level and was done with its correction, you could sell your put to close the initial option position and buy a lower strike put farther out in the calendar (i.e. Dec 300.0 Put for $24). That option trade management practice is referred to as rolling down and out. You would then still have your remaining CMG shares in a protected long position but the floor is shifted lower to $276. The net profits going forward from continued CMG appreciation would be greater since you had taken a bunch of option premium off the table and switched from a very deep in the money to an at the money put. Just be careful not to roll until you definitely have seen signs of price support and better odds of a sustained reversal higher.

The opportunity to buy a put option without owning CMG shares could have been used for a speculative directional trade in order to profit from an anticipated drop in CMG. All the math is the same as above. The risk of losing in the trade is limited to the put premium paid. Compare that to an attempt to short sell CMG stock where there could be unlimited losses and a great deal of trading capital  tied up. If you use puts to make defined risk directional short trades, stay small, be sure to calculate your breakeven point (Strike Price – Put Premium) and be very aware of the time value or Theta decay that reduces the price of the put and erodes your potential profit.

In upcoming articles, we’ll explore more option portfolio protection strategies – writing covered calls, creating option collars, and introducing option spread trades. All will be fairly straight forward given that you already understand the Call and Put basic fundamentals that we’ve presented in this article and the previous one. Trade well and have a great weekend. 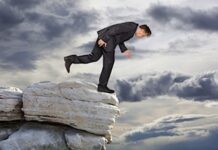 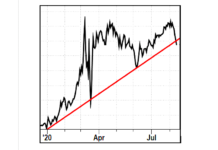