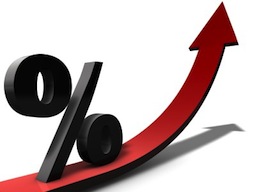 By Naufal Sanaullah    The impact of Fed’s large-scale asset purchases (LSAPs) on interest rates continues to be one of the most contentious topics in financial circles, more than four years after quantitative easing began. Since QE swaps yielding UST and MBS product with cash, it reduces the [ten-year equivalent] supply of government paper and increases the supply of liquidity. However, due to the endogenous nature of credit creation, in our environment characterized by impaired credit demand elasticity, this liquidity does not flow into the real economy and thus LSAPs have little efficacy in accelerating/unanchoring inflation expectations. However, LSAPs do succeed in lowering interest rates and, more importantly, compressing spreads, and this occurs through a reduction in real yields.

Indeed, the Fed’s extension of QE into calendar-based guidance in 2011 drove real yields negative all the way down to the 10-year tenor. This correlated with the market’s widespread adoption of the deleveraging paradigm, which had grown into a well-accepted notion around the same time. Not until 2011 did expectations of ZIRP (Zero Interest Rates Policy) become entrenched and “emergency actions” become the norm. However, since the institution of “Draghi put”, the Fed’s announcement of rule-based guidance, and growing signs of nascent US economic reacceleration, real yields have risen and 10-year reals are finally approaching a break back above zero.

The rebound in US housing prices has alleviated and mitigated many of the symptoms of the US household deleveraging, allowing the private sector to normalize its growth trajectory after years of depressed conditions. This, combined with the Fed tying continued asset purchases to UER and inflation expectation targets, has led to increased rate market sensitivity to rebounding economic data. However, not until Bernanke implied a taper of bond purchases could begin in the “next few [FOMC] meetings” if the data warranted it did the market begin to fully appreciate the potential imminence of rule-based guidance shifting LSAP trajectory. Click chart image to enlarge. 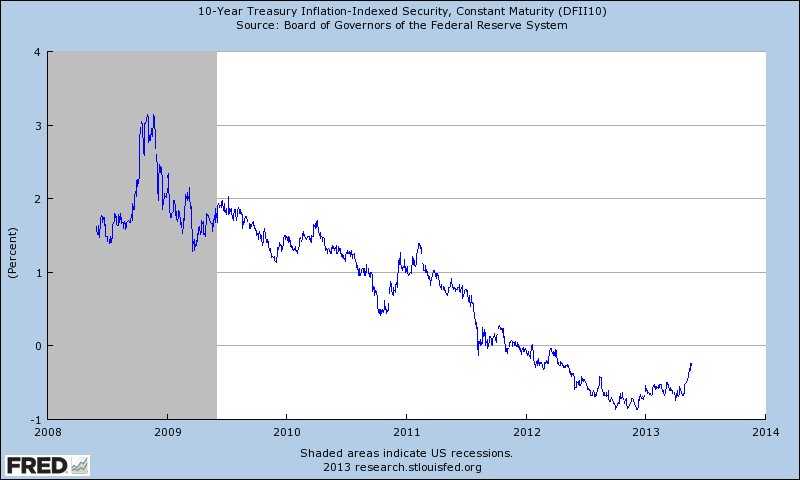 Unsurprisingly, rate sensitive securities have been hit hard in this recent rates-up move. Credit, particularly IG, has sold off all month, as have munis and MBS. However, this has also extended into “pseudo”-rate equities, including dividend stocks and utilities. The low and declining rate environment, combined with the scarcity of product in the system (exacerbated by QE), led to large inflows into these pseudo-safe havens and “rate product substitutes.” We may be witnessing the first stages of an unwind of these flows. In addition, rate-sensitive strategies that gained a lot of investor demand in recent years have also seen sharp corrections. These include risk parity, opportunistic fixed income, and 60/40 strategies.

I don’t know where interest rates are going next, although I do take seriously the possibility of a new real rate regime. But it is important to understand which instruments and strategies will under- and outperform in different rate regimes. In a rising interest rates environment, “no-brainer” trades of recent years, like MBS and dividend equities, could turn into poor performers quickly. Meanwhile, fixed income that floats to LIBOR like leveraged loans could see solid inflows, especially as technicals remain strong in parts of credit space even in the event LSAPs cease.

If the curve bear steepens, banking and other cyclicals should continue to perform well despite rising interest rates. In addition, strategies that rely on leveraged exposure to credit risk-free securities (like risk parity and 60/40 strategies) can still find compelling value in other rates markets, particularly in receiving Australian rates. The Reserve Bank of Australia is still cutting interest rates and appears further from the end of its rates cycle than the Fed, not to mention 2yr AUGBs yield higher than even 10yr USTs. The FX exposure can be expensive to hedge but a portfolio receiving Aussie rates with short AUD as a distinct alpha position is well positioned for the next twelve months in my opinion.

The real concern is if the curve bear flattens as LSAP flow recedes and eventually ceases. This would represent the victory of the “flow” arguments of QE’s impact, versus the “stock” arguments, and would reverse the Fed’s effectiveness since 2009 in making cash an unattractive option for wealth and value preservation. In such an instance, we could see bonds and stocks selloff together, a reversal to their concurrent rallies since 2009, and cash outperform.

Of course, it is possible interest rates chop sideways or even decline further, in which case the “yield chase” assets are likely to outperform. But given the reacceleration of US growth, diminished tail risks from the Eurozone and from US fiscal policy, and Bernanke’s shift in rhetoric/tone, balancing one’s portfolio to have the potential for outperformance in rates-up is more important now than anytime since the financial crisis.

About Naufal Sanaullah:  Naufal is a student in applied mathematics & statistics and active student, follower, and participant in financial markets and macroeconomics. His investment approach is a combination of global macro top-down analysis and individual industry-level growth trend analysis, filtered through a price-, volume-, moving average-, and sentiment-based approach that includes technical analysis. Naufal is the author of macrobeat.com and has appeared on numerous media outlets. You can find him on Twitter under @naufalsanaullah.