While the U.S. markets continue to figure out its own identify, whether it’s meant to spend the next few months as a bear or a bull there are some interesting chart setups taking place in a couple international markets. Today I’m going to take a look at one of those foreign markets: Japan. And we’ll keep our focus on the Japanese ETF, the iShares Japan (EWJ).

Below we have a one year daily chart of the Japanese ETF. After breaking out above prior resistance earlier year (around $12.20), the Japanese ETF made a nice run higher (a run covering another 10% higher to its YTD high). And we’ve also seen continued pushes in momentum into ‘overbought’ territory, which as I’ve said previously on my blog – this is typically a good thing. It shows a healthy sign of buying. It is now up a cool 14.1 percent (through yesterday’s close).

However, a possible double top pattern has been created as the iShares Japan failed in its attempt to take out its April high last month. While making a run back towards its highs ($13.30) the Relative Strength Index (RSI) put in a lower high, a sign that momentum was not confirming the advance in price. This is also a sign that japanese stocks (via the ETF) may have begun to weaken.

Since then price has fallen back to its prior low around $12.80 and may head even lower if additional selling pressure mounts. I’ll be watching the Japanese ETF to see if it can find support at its 100-day Moving Average (around 12.66). If it doesn’t stabilize there, then price may find itself back at the level that had been resistance in 2014 ($12.20). On the flip side, if price is able to hold above $12.80 then we may see a continuation of the current trend and another attempt to set a new high. As a price follower, I’m happy to let price lead the way. 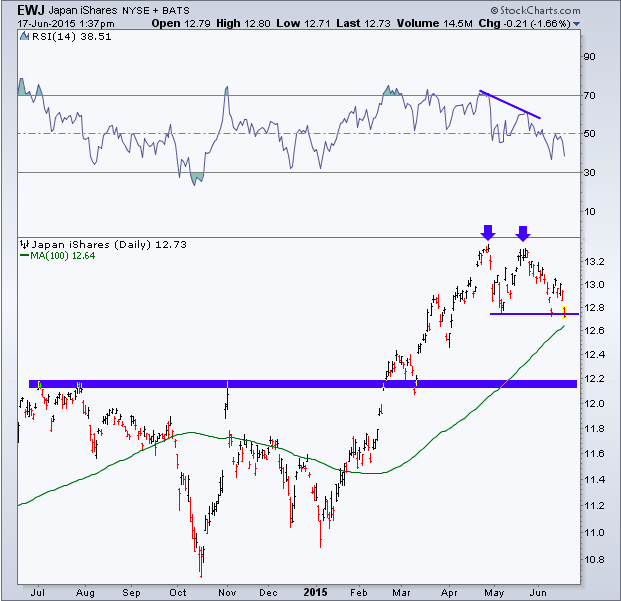