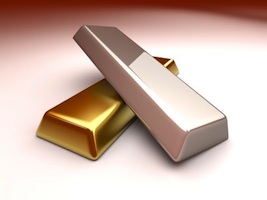 Throughout the past century, two things have contributed to strong, and at times parabolic, metal markets:  1) financial panic, or fear of panic AND  2) Money printing or inflationary monetary policies.  When people fear bank runs and/or currency devaluation, it is only natural that they turn to commodities as a source of intrinsic value… particularly hard assets with a rich world history such as Silver and Gold.  It takes but a brief, high level look at the crises of the past century to understand the magnitude of the current financial meltdown and subsequent metals melt up.  And it makes us realize just how high the stakes were, and still are.

Roughly a century ago, the U.S. banking and Trust system was gripped with fear as Investment banks that lent significant amounts of money to up and coming Wall Street “affections” suffered runs in lieu of their failures.  And when the Knickerbocker Trust Company failed, the “1907 Panic” was well under way.  It took the brawn of JP Morgan to pull together funding for the banks to return them to market.

Just a quarter century later, high times gave way to frothiness and we suffered another financial meltdown, the well documented and storied Great Depression.  This malaise was underscored by high unemployment, deflation, and protectionism.  In 1933, all privately held gold over $100 was confiscated by the government at $20/oz and revalued just one year later at $35/oz, a significant profit for the government that devalued the dollar and expanded the money supply.  The $35/oz standard stayed in place and assisted in keeping a lid on any significant inflation.  That is, until the 1970’s, when our resilient nation was again suffering from war and protectionism.

In 1971, Richard Nixon sent shockwaves through the financial world when he announced that the US was abandoning the gold standard.  This opened the door for more dollar devaluation and money printing.  As a byproduct, high commodity prices and interest rates riddled the 1970’s with stagflation and gave birth to the rise of metals once again.

Although each of the three crises saw asset values for silver and gold rise on a banking and collateral basis, the 1970’s saw the sharpest sheer $/oz increase, culminating in 1980, as gold rose to $850/oz.  See 30 year charts for Silver, Gold, and the Dollar below. 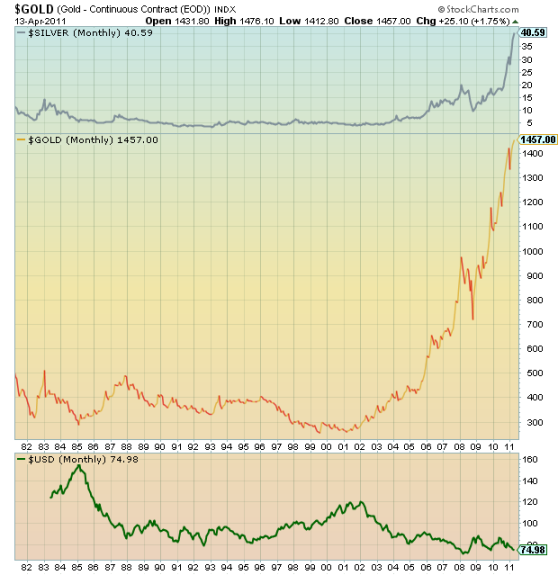 Fast forward to the ongoing current crisis and it is easy to see the unpleasant parallels to each of the past crises; the Tech Bubble, 9/11 and the ensuing war on terror, extremely cheap money and vast money printing, a frothy banking climate that went bust, high unemployment, and a good amount of subsequent protectionist jaw boning.  So, where does that leave us?  With an extraordinary pile of national debt, underwater homeowners, a devalued currency, inflation on things we need and deflation on things we want, and $1460/oz.+ Gold and $40/oz.+ Silver.  Tinseltown.