First things first, with the Fed interest rate decision out on Wednesday, this week is anything but normal.

With that said, this week is also option expiration week (OpEx).  So I wanted to take some time to delve into December OpEx weekly returns and add a couple wrinkles.

I’ve noted before that this week tends to have an bullish bias for the S&P 500. That said, some of the largest weekly drops also tend to happen during this week. In other words, when things turn bad it happens in a hurry during this week.

I don’t think it is a coincidence the major drop in August took place during this week (see table below). 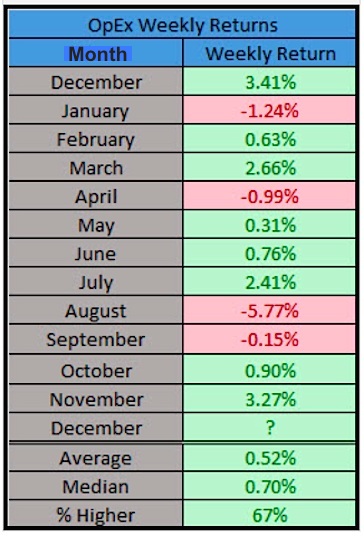 Above sums it up well, usually things go well, but when they don’t go well; it can get ugly fast.  Three of the four red weeks were down 1% or more.  The reason has to do with millions of option contracts expiring and when things turn south, option market makers are forced to hedge more.  This hedging can lead to more selling or what is known as a delta-hedging decline.  All you need to know is these weeks can provide more fireworks to the downside than your average week if things turn south.

What about December OpEx weekly returns?  Going back 10 years, this week has been higher eight times. But there’s a caveat:  The one big drop was in 2011. 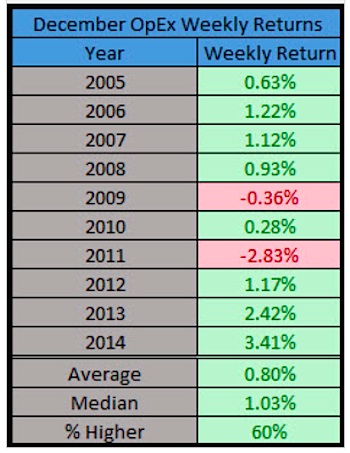 As we’ve been sharing nearly every week in our Coffee with Chris and Ryan report, 2015 has done a great job of imitating 2011 so far.  If this continues, this week could be expected to drop again soon. So the question is: Will December OpEx weekly returns mimic 2011’s nasty decline?

The good news is 2011 did bottom later this week before a nice year-end bounce. 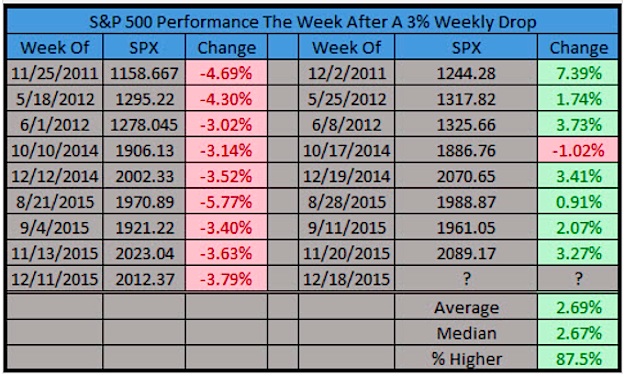