Today’s bearish continuation occurs in the 12th negative week of the 16 that have elapsed since Crude peaked at it’s Bearish Shark Potential Reversal Zone (PRZ) near $108, show below at point “D”.  Since then, CL has dropped over 18%.  From it’s YTD peak – the inception of the Shark at “X” – at today’s lows Crude Oil’s continuous contract has dropped into official bear market territory, down as much as -21.43%. 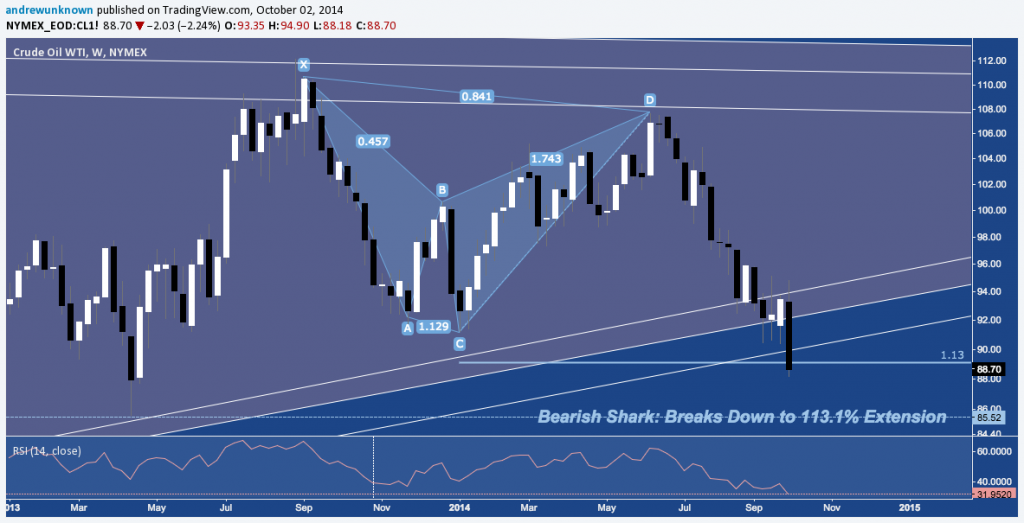 If today’s drop holds, CL breaks an important supporting trend line.  In the monthly chart below, we see the context of this incipient trend line break: a 4-year Ascending Triangle that appears to be losing support.  The time measurements above the pattern show that this potential breakdown occurs 66% of the way to the triangle apex, an optimal spot for a strong pattern resolution.

The measurement implications of this triangle fit it’s length. At $43.71 in height, a basic measured move higher goes to $157, while a comparable move lower carries Crude down to $46/bbl. 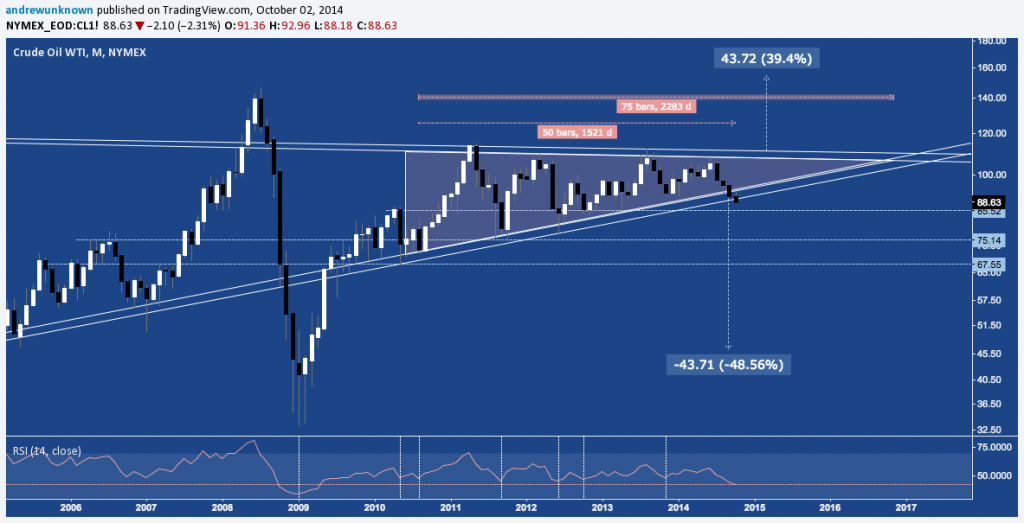 Patterns featuring diagonal trend lines are among the most challenging to trade, however; and within this class, large patterns that traverse long distances in time and price belong in an elite level of difficulty.  In the case of Crude’s triangle, Every higher low and trend line bounce becomes a support foothold and locus of demand as the price breaks down, creating an intermittent braking effect that dilutes the momentum of the decline.  Three such levels are marked above, falling at $85, $75 and $68.  As a result of these horizontal support-derived areas of demand, any push lower by CL will be hard-fought; and the plausibility of ultimately reaching the $46 target is an effective coin toss at this point.

In the near-term, Crude’s monthly RSI (bottom panel, above) further complicates matters, delving into 5.5-year lows to levels last seen in 2008-2009’s rounded bottom.  If momentum isn’t signaling a quasi-sell panic, RSI begs the question of whether a downside breakout can proceed from here.

How CL finishes this week will be critical.  Ascending Triangle support falls neatly at $90/bbl: this is the level the long-side is burdened with recovering in order to stay a rally back toward $100 and the top of the triangle.  Below $90, the next major level of support on-watch comes in at $85’s horizontal support.

Author holds no exposure to asset classes mentioned at the time of publication.  Commentary provided is for educational purposes only and in no way constitutes trading or investment advice.