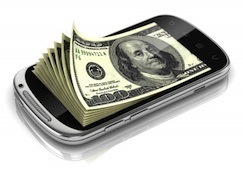 By Max Moore     BlackBerry (BBRY) has been one of the most controversial stocks in the past two quarters.  As of April 15th, 2013, short interest on the stock was at 174,340,145 shares, or about 33.2% of outstanding shares (including TSX shorts). For context, as of the same date, short interest in JCP is 25.6% and the short interest in HLF is about 30.6%. Considering the mobile device landscape, it may seem like BBRY would make for a great short. Heavy competition compresses margins and earnings plateau (at best). While shorts may have the industry right, I’ve set out to convince readers that the market has the company wrong. Here is my fundamental, yet contrarian, take on BBRY valuation and prospects.

Getting the Business Right

Over the last quarter, it’s clear that the market has predicated the survival of the company on the success of the BB10 series (Z10 and Q10) as a mobile phone. While device sales will certainly have a meaningful impact on free cash flows for the foreseeable future, part of my point is that the company is valuable with no devices at all. The other part of my point is that the Z10 and Q10 aren’t really comparable to the iPhone or any of the Samsung products; it’s not really a phone.  Back in 2010, Blackberry BBRY acquired a little Canadian software company called QNX for approximately $250 million.

To sum up what QNX allows BBRY to do, consider Apple’s iCloud (singular). The iCloud stores everyone’s media and allows them to access it via the web almost anywhere.  QNX allows everyone’s home computer to be their own little cloud, and the Z10/Q10, using QNX, allow you to connect your PC wirelessly to any device with QNX. The two key differentiating factors between this and iCloud is that the iCloud only stores media that runs on software designed by Apple (i.e., Numbers, Pages, Keynote, iTunes, etc…), and  it’s all stored on a single server (or family of servers). This is not computing, and therefore not mobile computing. This is Dropbox for Mac only…and even Dropbox works better.

Rather quietly, BBRY has both outlined what true mobile computing means, and patented the stage to make it real.  Imagine taking your computer tower, putting it in your pocket, and taking it with you anywhere you go and connecting it securely to almost anything. That ‘pocket tower’ is the Z10 and Q10, and this is why they aren’t phones.

Now that we’ve made our defense of the devices, let’s look at what else QNX is good for. QNX is the platform that BES (BlackBerry Enterprise Service) 10 operates on. In other words, it is the platform for their legendary security. Currently, BES generates around $100/year/subscriber with near 90% margins. At present, BBRY competes on this security and has now made it available for Android and iPhone users. The entire corporate side of the smartphone market can now enjoy Blackberry security, even if they do not own a BlackBerry. This is why the company is valuable, even without the devices. So let’s dig into BBRY valuation.

Blackberry BBRY Valuation – Getting a ballpark base value

The 10 day simple average of the stock is about $14.63, with a trading range of $13.50-$16.43. Valuing this sort of intellectual property is nearly impossible, so I’ve opted to keep it as simple as possible in looking at BBRY valuation. Using the most recent quarter’s balance sheet, I’ve prepared a simple estimate of what a potential proceeds would be if the company were wound down this year. Here’s my base case. Click image to enlarge. 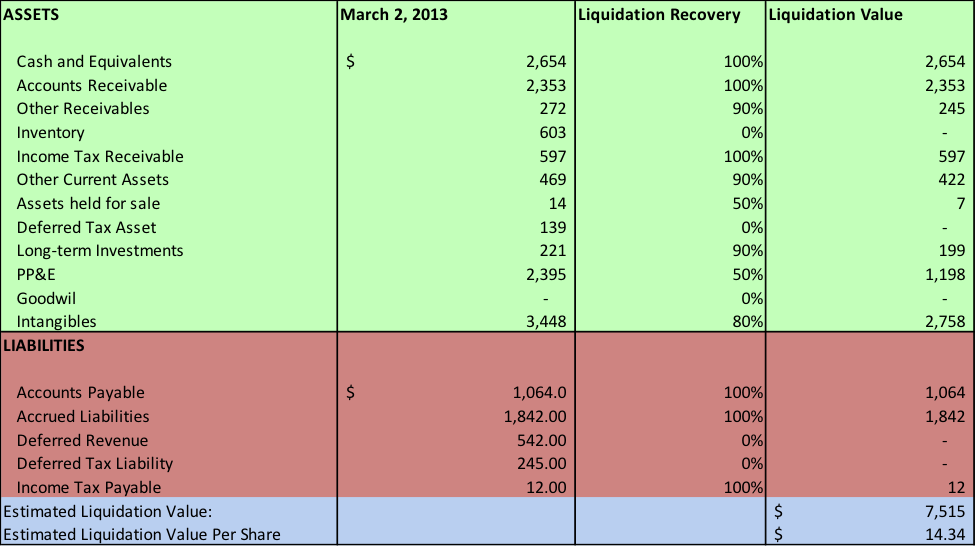 Going through it line by line:

Cash and equivalents – these items have a self-evident recovery value of 100%.

Accounts receivable – provided most of BlackBerry’s customers are either carriers or other large corporate, I assumed a 100% recovery rate on the trade receivables and gave 90% to account for some bad debt expense on the “other receivables.”

Inventory – for conservatism, I wrote it down to 0% recovery.

Income tax receivable – assuming there is no risk of the taxing authority missing the payment, a 100% recovery is justifiable.

Other current assets and long-term investments– these are largely comprised of government debt, money market securities and other long-term corporate debt. All of these have relatively liquid markets and don’t relate specifically to the core operations of BBRY, so I assumed that a 90% recovery was plausible.

Assets held for sale – although these are immaterial, I wrote them down to 50% as little detail is available on what they are.

Deferred tax assets – if they are winding things down, temporary differences between income tax expense and the actual tax bill cannot be expected to reverse, so I’ve written this down to 0%.

Property, Plant & Equipment – looking BBRY’s most recent information form, roughly $1.4B of the gross PP&E related to BBRY specific operations (~$711 million net of depreciation). Backing that out of the total PP&E leaves approximately $1.2B, or a 50% recovery.

Intangibles – This is where the fun begins. I would say we’ve made a fairly strong case for the future of BBRY’s patents. I approached this by asking “What would an auction involving Samsung, IBM, Apple, Google, and other tech giants look like?” Consider what was mentioned earlier: QNX allows each and every user to have their own cloud. This means no server farms for Apple, Google, IBM, or anyone else to maintain, all while still offering the benefit of securely accessing both their programs and files almost anywhere. This is an enormous cost saving to these firms and leads me to believe that BBRY’s patents would fetch a pretty penny at auction. In reality, there is no formal auction, but they certainly wouldn’t be sold to the buyer with the first offer. As such, I think a 80% recovery seems fair for a base case.

All liabilities ex deferred revenue and deferred tax liabilities – I am assuming that all bills and taxes owing would be paid in full, and therefore applying a 100% repayment value.

Deferred revenue – Someone has given BBRY cash in advance of them earning the revenue. Presumably, the customer will either get their money back or receive their inventory (if they choose to enforce a contractual agreement). The former would warrant a 100% repayment rate, and all else equal, give a liquidation value of $14.00. The latter however, assumes that the revenue would have been physical inventory and that they would have received it. In this case, a repayment rate of 0% is suitable given the recovery on the inventory is also 0%. I’ve assumed this in the table above.

Deferred tax liabilities – Since temporary differences are not expected to reverse, I’ve written this down to 0%.

Although I won’t walk through each line for the optimistic case and pessimistic case, the major differences are the outcome of a patent sale, recovery on trade receivables and market values of liquid investments. 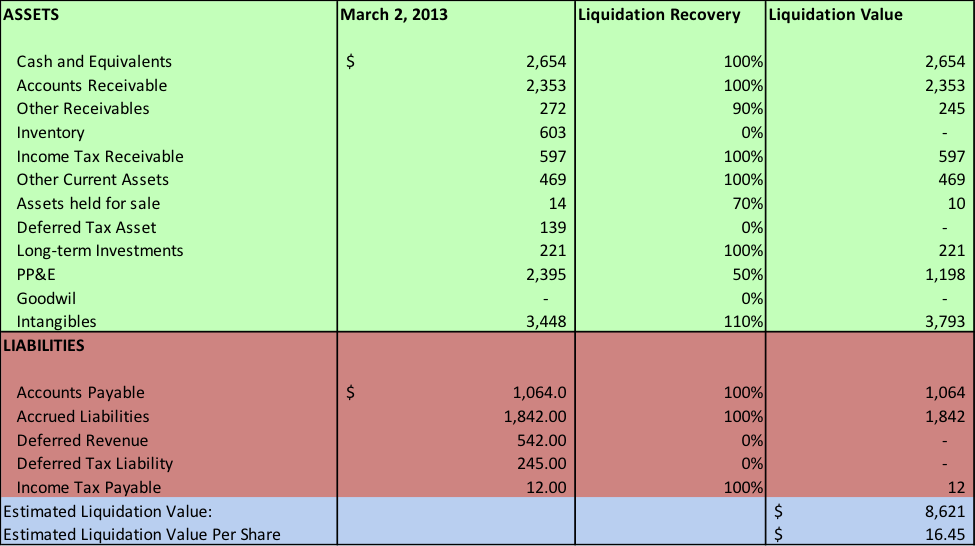 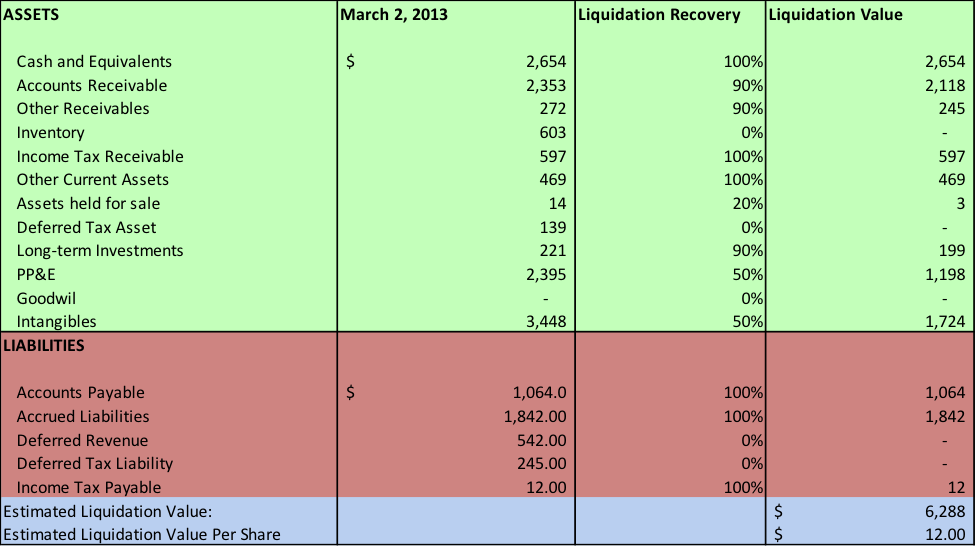 Given the base case liquidation value at ~$14.34 and the 10 day trading range, if you can catch BBRY on the dips, you’re essentially buying the future of mobile computing for free, or a steep discount at the very least.

Not only does BBRY have promise as a long-term buy and hold (due in part to my thesis on BBRY valuation), but the stock has had a huge trading range over the last two quarters, making for a trader’s paradise (or hell). Be sure to read Andy Nyquist’s follow up Chartology post on BBRY, offering a near and intermediate term technical take on the stock.  Thanks for reading.

Position in BBRY at the time of publication.