The S&P/Case-Shiller U.S. national home price index advanced 5.2 percent year-over-year in October. This was the fastest growth since July last year. However, annual home price appreciation has been decelerating since peaking at 10.9 percent two years ago. And this likely indicates a housing slowdown.

And by extension, this could impact the consumer in 2016.

The October 2013 peak looks substantially weak compared to the 14.5 percent annual growth in September 2005, but does not look as bad on an inflation-adjusted basis (arrows in Chart 1). 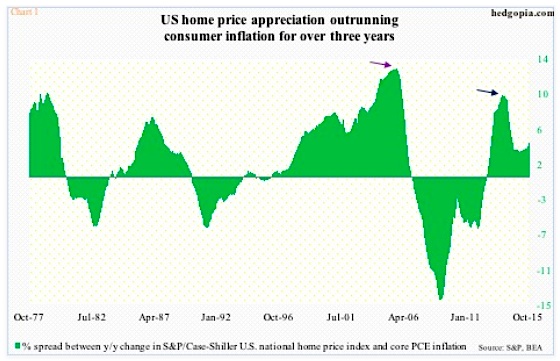 Back then, core personal consumption expenditures (PCE) inflation was running at 2.1 percent annual pace. This October, it only grew 1.3 percent. Inflation has remained suppressed for a while now. The last time this measure of inflation – the Fed’s favorite, by the way – increased at two percent annually was in April 2012.

As a result, home prices have been appreciating much faster than inflation.

This has implications for the consumer. And, more importantly, consumer spending. 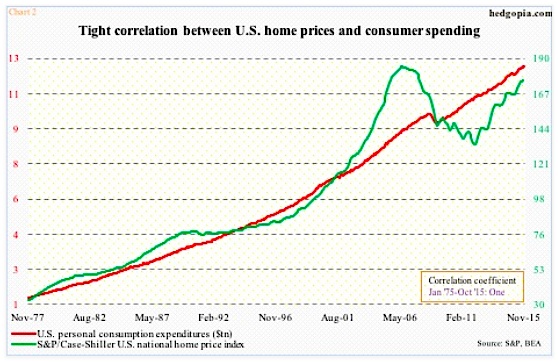 Historically, personal consumption expenditures have uncannily moved in tandem with how home prices have fared. Going back four decades, the correlation is a perfect one (Chart 2).

With this as a background, the deceleration in the S&P/Case-Shiller index cannot be helping consumer spending. And any further slowdown in housing will likely have a ripple effect.

In the post-bubble period, home prices rose much faster in relation to sales. Chart 3 depicts this phenomenon well. 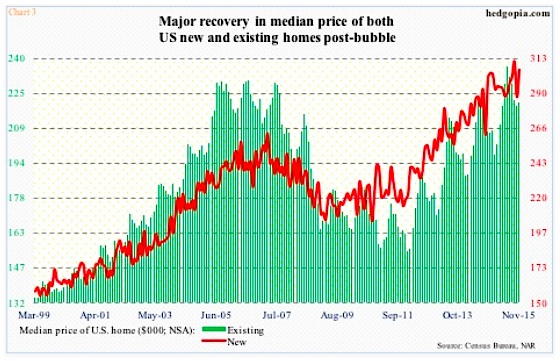 The rapid recovery in home prices is already crimping sales.

In November, sales of new homes increased 6.3 percent month-over-month to a seasonally adjusted annual rate of 490,000 units, but were down 10 percent from the post-bubble high of 545,000 in February this year (Chart 4). Is this indicative of a broader housing slowdown. 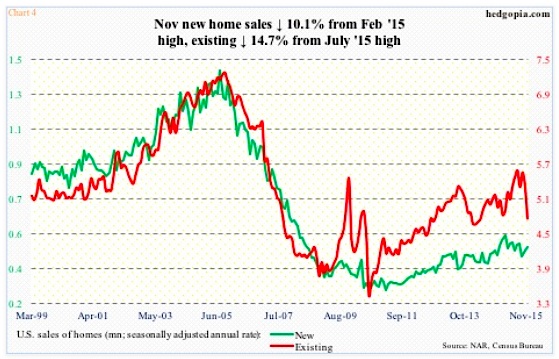 Similarly, existing home sales fell 4.1 percent in November to a seasonally adjusted annual rate of 4.76 million units. This was the first time in nine months that sales came in below five million. November sales were 14.7 percent below the post-bubble high of 5.58 million in July this year. That type of data says that we should be on alert for a possible housing slowdown in 2016.

Amidst weak wage gains in particular, if sales are to gain traction, price needs to behave next year. And, as Chart 2 above shows, this can easily reverberate through consumer spending.