Summary of Fund Managers Asset Allocations: Through early June, US equities had risen 17% from their lows in February. Equities outside the US had risen 15%. A tailwind for this rally was the bearish positioning of investors, with fund managers’ cash in February at the highest level since 2001. Similarly, their equity allocations in February had only been lower in mid-2011 and mid-2012, periods which were notable lows for equity prices during this bull market.

Remarkably, allocations to cash are now even higher than in February, and allocations to equities dropped to a new 4-year low. Fund managers have pushed into bonds, with income allocations rising to a 3 1/2 year high in June. Overall, fund managers’ defensive positioning supports higher equity prices in the month(s) ahead.

Fund managers asset allocations to US equities remain near their 8-year lows, a level from which the US should continue to outperform, as it has during the past year. Europe remains overweight. Emerging market allocations have jumped significantly in the past five months and are now the most overweight since September 2014, a high from which emerging markets indices fell over the next half year.

Among the various ways of measuring investor sentiment, the BAML survey of global fund managers is one of the better as the results reflect how managers are allocated in various asset classes. These managers oversee a combined $600b in assets.

The fund managers asset allocations data should be viewed mostly from a contrarian perspective; that is, when equities fall in price, allocations to cash go higher and allocations to equities go lower as investors become bearish, setting up a buy signal. When prices rise, the opposite occurs, setting up a sell signal. I did a recap of this pattern in December 2014.

Let’s review the highlights from the past month.

Cash: Fund managers cash levels at the equity low in February were 5.6%, the highest since the post-9/11 panic in November 2001, and lower than at any time during the 2008-09 bear market. This was an extreme that has normally been very bullish for equities. Remarkably, with the SPX having since risen 17%, cash in June is now even higher (5.7%) and at the highest level in 14 years (since November 2001).  Even November 2001, which wasn’t a bear market low, saw equities rise nearly 10% in the following 2 months. This is supportive of further gains in equities. 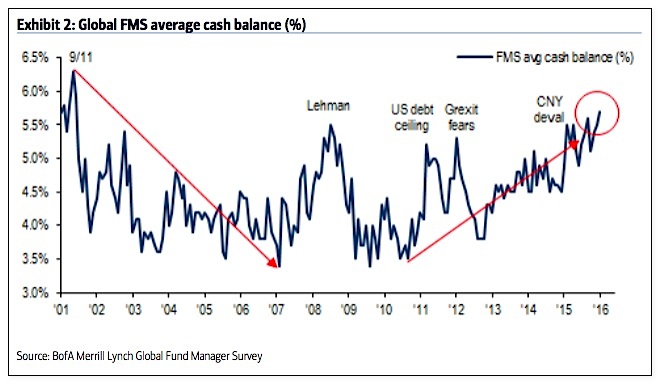 Global equities: Fund managers asset allocations were just +5% overweight equities at their low in February; since 2009, allocations had only been lower in mid-2011 and mid-2012, periods which were notable lows for equity prices during this bull market. Despite the rally since February, allocations are now even lower, dropping to +1% overweight in June. This is 1.1 standard deviations below the mean. 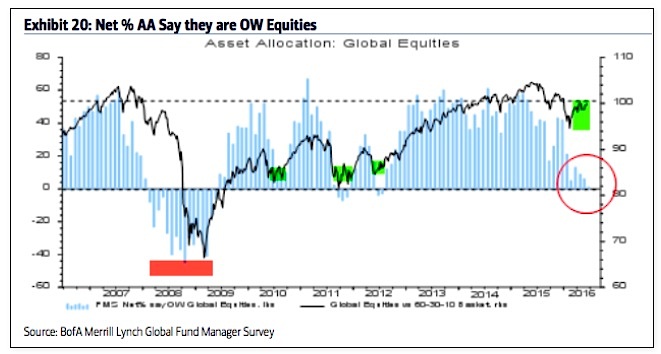 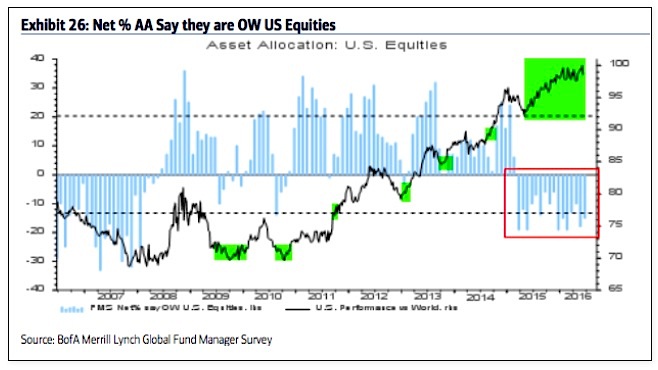 Japanese equities: Fund managers asset allocations to Japan have been falling but are flat m-o-m at -6% underweight, which is the lowest since December 2012.  The region has been underperforming in 2016. 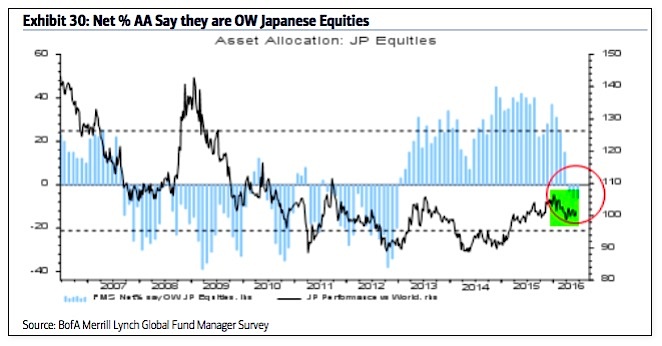