Over the past several weeks, the Euro has been attempting to put in a tradable bottom. In this post we’ll look at how that is taking shape. Note that this is an update to our March 13 post that suggested the Euro should find support for a medium-sized corrective move versus the U.S. Dollar. The share price for the Guggenheim Investments Currency Shares Euro ETF (symbol FXE) bounced for several weeks from near our first support level at 103.56.

The next question is whether the Euro can form a higher low soon. Check out the weekly chart for FXE below. 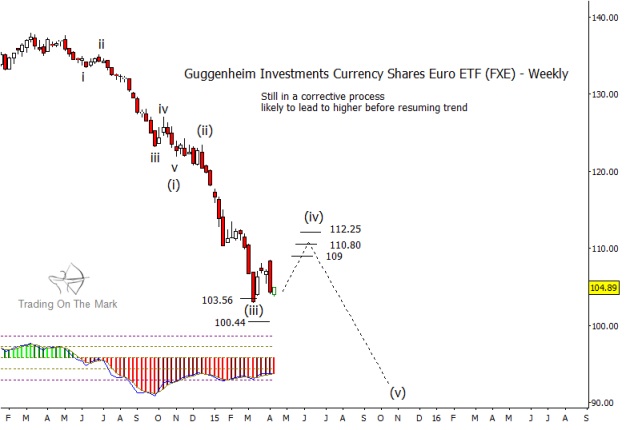 We believe the U.S. Dollar Index will resume its upward trend sometime near the middle of the year, and the Euro should get back aboard its long-term downward trend at about the same time. Until then, it makes sense to watch for Euro to climb higher in what could be a somewhat choppy move.

On the FXE chart, the three most prominent Fibonacci-related targets for an upward move range from $109 to $112.25. The higher one may be slightly more favorable than the others, because it is near the area of the prior fourth wave of lesser degree (an Elliott wave rule of thumb).

For those looking for a long trade in the Euro, it is important to note that a marginally lower low in the next few weeks would not invalidate the prospect of an upward or sideways fourth wave pattern. However, it would make the move more difficult to trade.

Traders with a longer lime frame may wish to shop for an opportunity to trade the Euro down from an expected mid-year high. We will be able to refine the resistance targets as the pattern develops.