Something interesting happened on the way to the much-vaunted Housing recovery. To the apparent dismay and consternation of the Fed and homebuyers waiting in the wings everywhere, longer-term rates rose following the May 1 FOMC meeting as speculation about the timing, pacing and intensity of the central bank’s LSAP taper captured bond markets.  They rose, farther than and with an aggressive speed few could have anticipated.  Whether this development puts an appreciable dent in (or signals the death knell of) the burgeoning up-trend in prices, sales, restoration of positive home equity and reinstatement of the American Dream remains to be seen; but a few cracks in the Housing recovery facade have appeared that are difficult to ignore.

In the nearly 3 months that have elapsed since that Fed meeting, longer-term rates have rapidly risen; and though pace of the increase has plateaued, rates remain stubbornly higher; and mortgage rates with them.  The Fed has attempted time-and-again to talk yields back down, even while it remains puzzled they are higher at all.  In the Fed’s view, because there has been no discussion of reducing its Treasury and MBS stock – only the pace and volume of additional purchases – any front-running of lower prices and portfolio reallocation is completely unwarranted, even irrational.

Not that it matters; but both markets seem to disagree.

Looking in on some Housing-specific metrics, some disconcerting developments have occurred. Building Permits, Housing Starts and Existing Home Sales prints for June were disappointing (permits and starts each suffered their biggest misses in years), perhaps in response to higher mortgage rates though its too soon to tell and the trend remains in an undeniable upswing.  In contrast, New Homes Sales out earlier this week at 497k were well above expectations and at levels last seen in August 2008.  Not coincidentally, according to the Mortgage Bankers Association ARM loan applications are at levels last seen in July 2008 as buyers reach for higher prices and absorb the sticker shock of the spike in fixed rates.  The circumstances are different, but these developments – and those dates – seem oddly familiar.

Instead of taking you down the garden path of weaving together a macro narrative with broad housing fundamentals, though: let’s have a look at several industry-related charts.

The benchmark 10-Year T-Note yield popped well over 100bps throughout May-June before snagging on the 2.5-2.7% range.  Mortgage rates responded just as you’d expect; and though everyone from head of the National Association of Realtors (NAR) to my buddy who heads up a prosperous local mortgage outfit insists with almost evangelistic fervor that “rates remain near historic lows”, there’s little doubt demand has slackened.  Nevertheless, as the CEO of the nation’s largest residential home builder mentioned on his company’s quarterly earnings call this morning, potential homebuyers are “shocked and disturbed” by the rate jump.  In fact, in their weekly survey the MBA has reported 9 weeks of application decreases in the last 10. Is the 10-year exerting a causal dampening effect on mortgage applications and the housing recovery, in general?

If that’s true, there may be good news ahead for the Housing recovery.  The congestion mentioned earlier on the 10-year yield is occurring at the potential reversal zone (PRZ) for a 18-month long bearish Butterfly (below).  Looking closely at the congestion (see image inset), it appears a Head & Shoulders Top (there’s a corresponding Inverse H&S on the 10Y itself) could see rates fall to at least 2.2% in the near future.

It’s important to remember, though: this H&S Top is potential until rates snap the neckline near 2.45% (remember it is better to work off the instrument itself, rather than the yield derived from it). Also, keep in mind in the context of tapering and tightening rate forecasts are widely held to go higher for the medium to long end of the curve for the foreseeable future – even while there are those who believes rates may yet go lower. 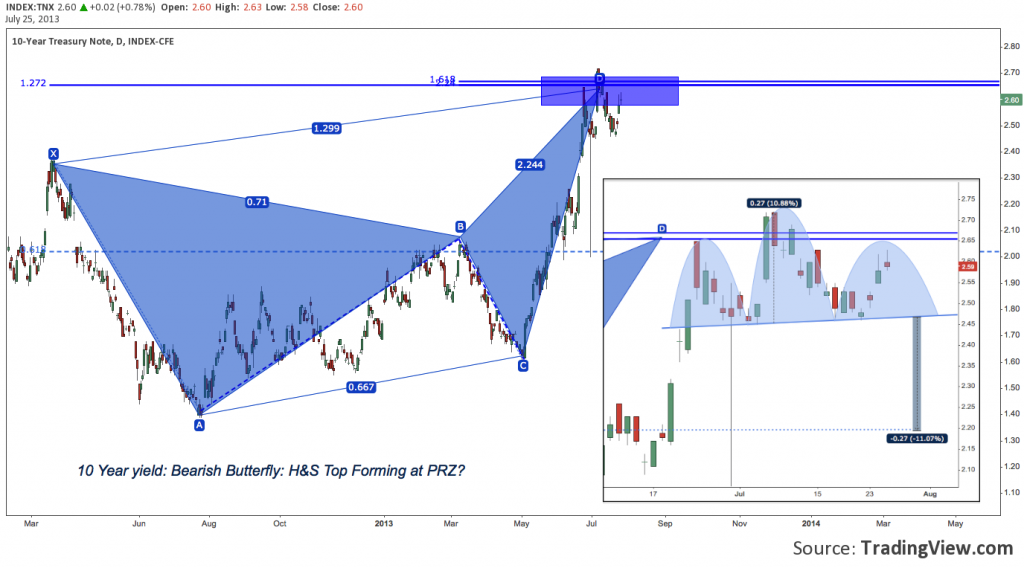 IYR gained roughly 300% from the 2009 low to late May, topping precisely when rates spiked.  Before bottoming in late June, the real estate ETF fell from 76 to 63 and 5-year trend line support before rebounding 50% in last 4 weeks.  Now IYR is in a small rising channel attempting to regain its footing, though it remains under pressure below 70. 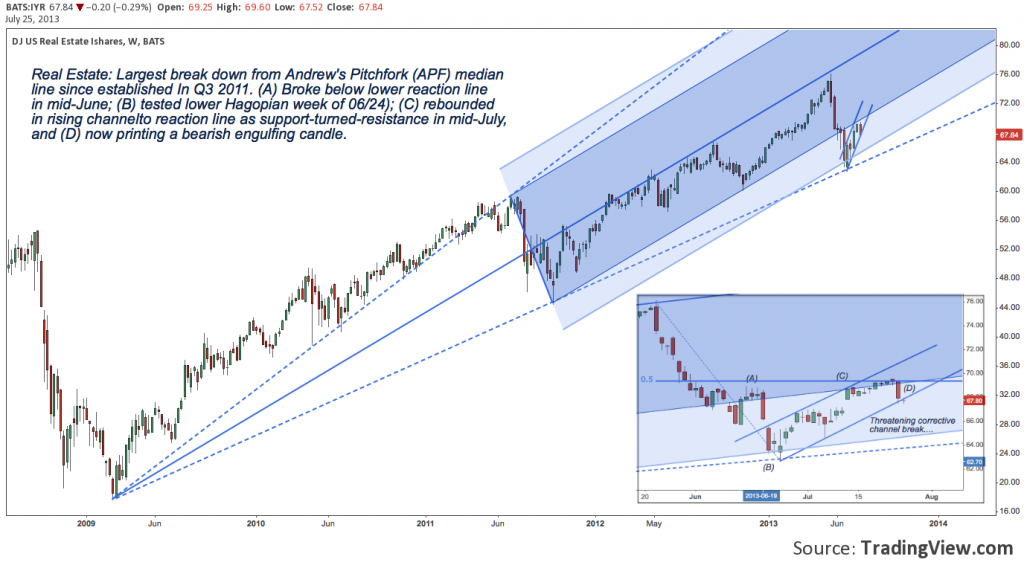 Juxtaposing the huge analyst misses for Building Permits and Housing Starts with Homebuilder and Construction stocks leaves one feeling industry exuberance for the Housing recovery may have gotten more than a little ahead of itself.

The S&P Homebuilders ETF (Symbol: XHB) sits at the top of a massive, recovery-blanketing bearish Butterfly.  It’s much wider in scope than the pattern just reviewed on the 10-Year yield, but ends with a similar construction. Here, there is a potential H&S Top that characterizes the PRZ.  This topping pattern activates below the neckline at 29 and would then target the November 2012 lows around 24. 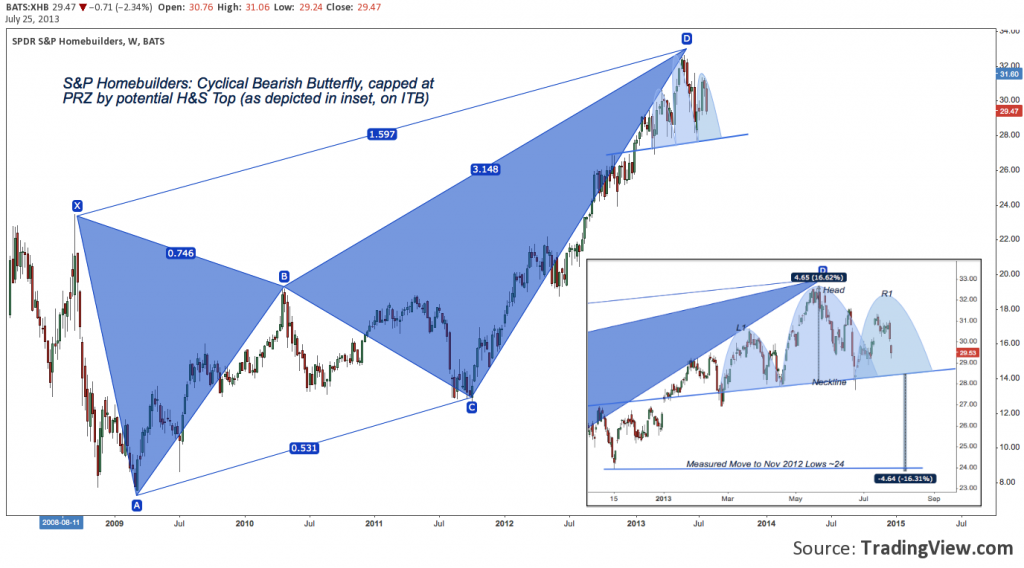 You might’ve guess the IShares US Home Construction ETF (Symbol: ITB) would exhibit a similar pattern; and sure enough the daily has a clear Complex H&S Top, also potential but threatening to activate with a close below its neckline in the 21.25-21.50 window.  Like on XHB, the Head  & Shoulders projects a measured move down that implies a significant sell-off is possible: 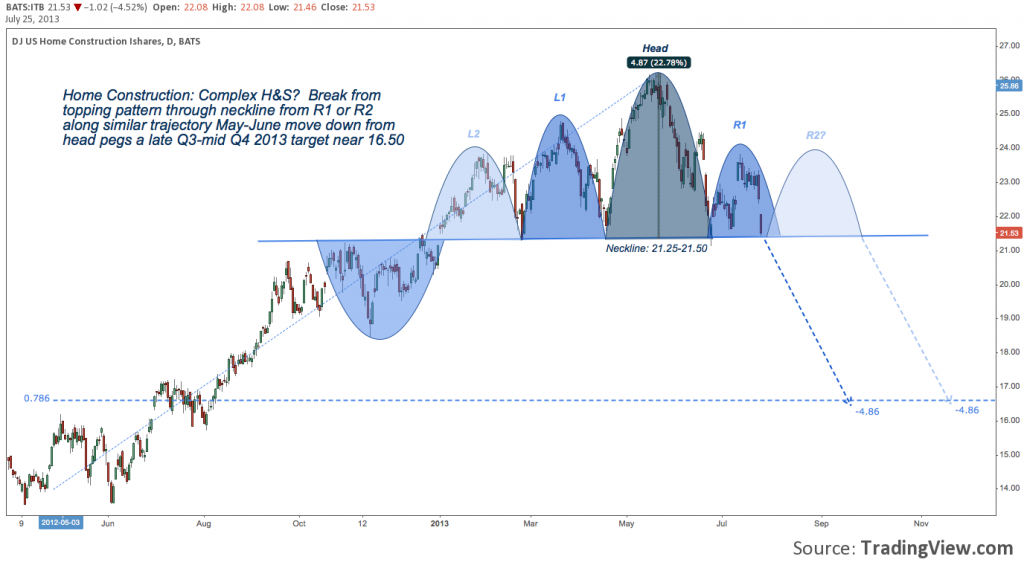 To more finely assess these potential broad topping patterns, this second series of charts focuses on several major housing construction and home builder companies.  You’ll immediately notice the striking similarity between them and the charts above; but these individual stocks (randomly selected from among their peers) have a more bearish twist. You’ll find a note parsing what’s going on with each individual stock on its chart below.

DH Horton is the largest residential home builder in the US.  Given its status as a housing bellwether, it exerts a lot of influence and is a reliable indicator of the way the wind is blowing in the industry. 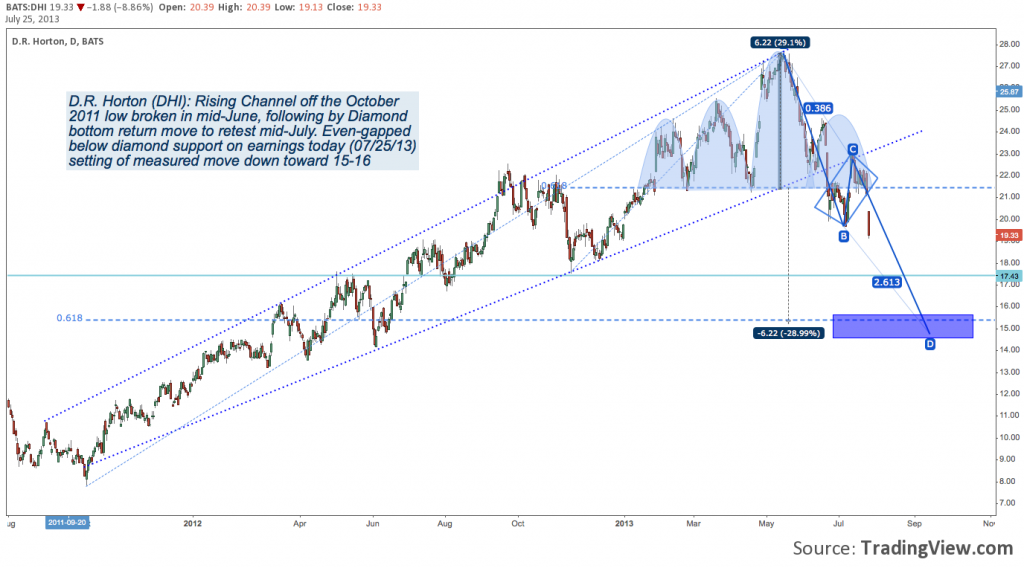 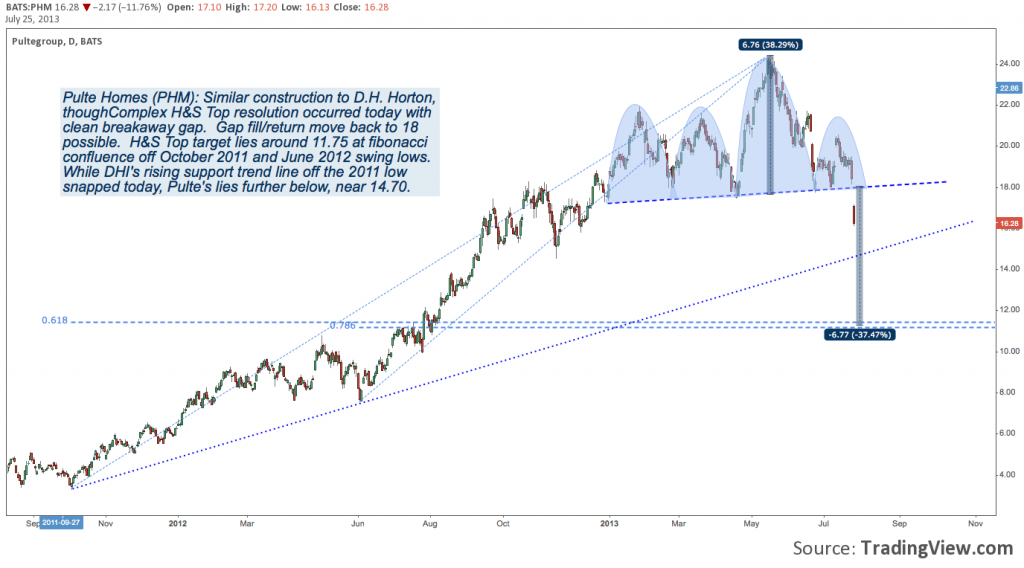 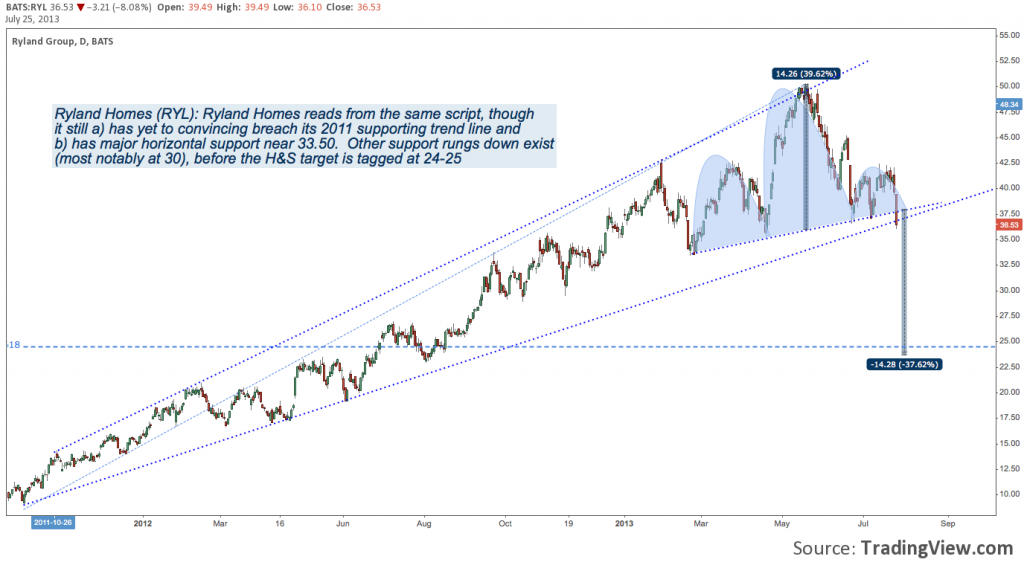 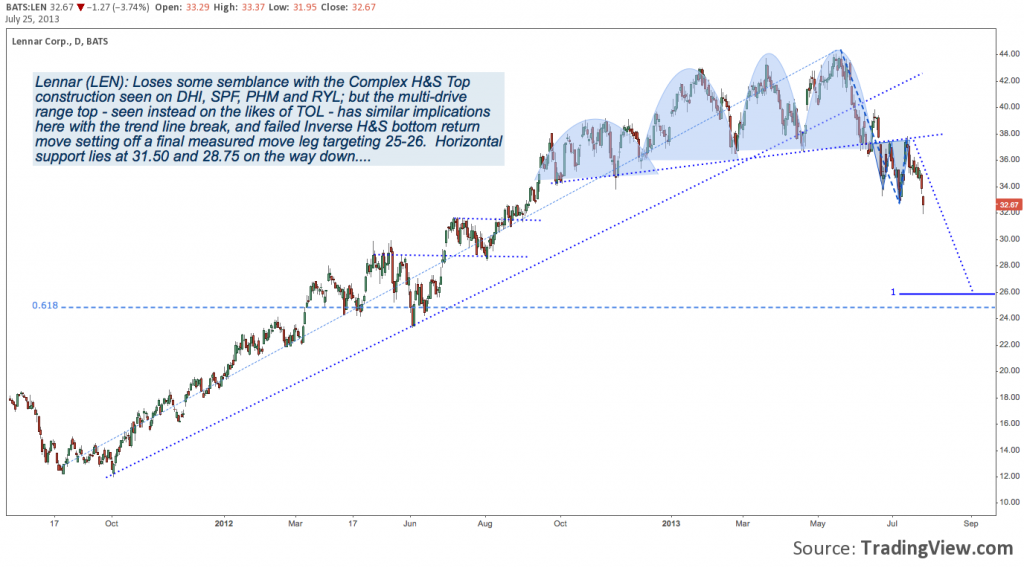 Author holds no position in securities mentioned at the time of publication.